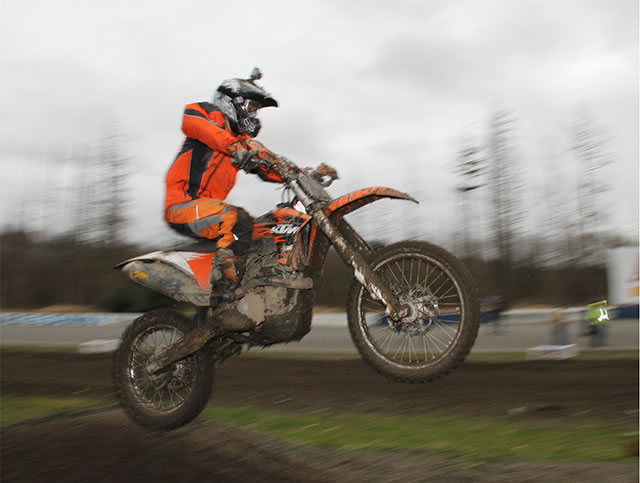 I tried motocross racing a couple times. I did OK but I didn’t have that ‘killer instinct.’ I would always push for preserving the body versus winning. But, I do love launching off a double and flying through the air. It’s just one of those things that feels right. When I was a kid we thought using a car hood as a ramp to get 10 feet was pretty cool, but now with the high-tech bikes, that’s a joke. If you take the time to learn how to jump properly it’s as smooth as glass unless you come up short (or in my case sometimes jumping too far).

My favorite track story is when I was at a local track, which is sadly closed now. I was doing my laps and was feeling pretty macho nailing those doubles, when suddenly this kid on a KX125 passes me in the air, turns, gives me a nod and proceeds to lap me again and again. I was devastated and went back to my truck for some water. Soon after, this kid rides up to me and says, “Dude, just how old are you anyway?” I told him I was 40-something (which I was at the time) and he says “Well, you’re not bad for an old guy.” So I sort of felt better, but not really. It turns out that kid was Ryan Villopoto… the guy who has won the AMA World SX Championship for the last 3 years in a row. I feel better now :)